BIRTHDAY BONUS WITH BELLA AND BORIS by James Darley

The crow’s careless wing beats were transformed in an instant to frantic lunges as it fought for the speed and steerage to respond to my purposeful arm movements 90 feet below. 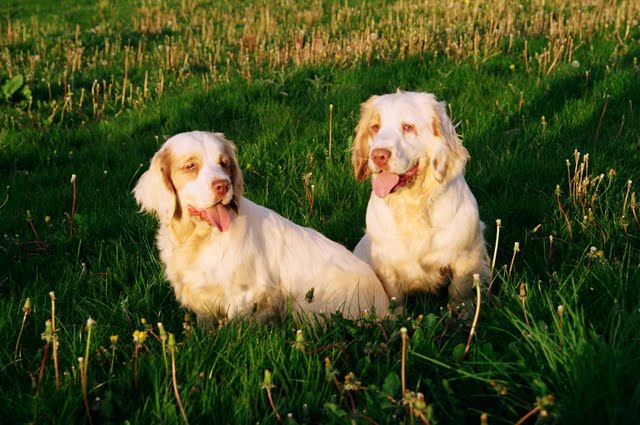 In front of me, two near-white spaniels, even more obvious to the bird but less threatening than a man, had already dropped as the gun came to the shoulder. For each of us, the next seconds were suspended in unfulfilled anticipation. The crow untidily topped the beeches of Bottom Wood; the young Clumber spaniels sank back on their haunches, eyes fixed on me; relaxing in turn, I lowered the stock of my William Evans side-by-side 16-bore to rest on my thigh and allowed a broad grin to spread across my face.

‘No crows today,’ I thought to myself. ‘We’re after more noble sport. And anyway it wouldn’t be right.’
After all, were it not for Bob Crow, the union leader who had brought the London tube train drivers out on strike, I would have been two hours away from this quiet Chilterns hillside at my office in a part of South-East London that had been “up and coming” for at least the two decades I had spent with the same public relations firm. Having already done justice to my decision to do my most pressing work from home instead of risking the delay an attempt to cross the capital would almost certainly have caused, and with a break in the rain that was too good to pass up, I had no second thoughts in taking the gun from the cabinet and the two youngsters from the kennels.

Ten days earlier I had decided they were ready to shoot over. They remained juvenile ‘ teenagers, lacking in social graces, hooligans even as far as my wife was concerned if she ever chose to take them out on leads. For me, experienced in the working ways of a breed that matures slowly, they were exactly how I wanted them: devoted to me, apprenticed in their craft to hunt, find, be steady and retrieve, while being uninhibited, athletic, and what Americans aptly call “birdy”. Excited. Exciting. The bitch particularly filled my eye, being exceptionally pretty, almost petite, and having the endearing habit of constantly returning unbidden to lightly mouth my hand, and the less endearing one of leaping into my arms with the smallest encouragement, and often with none. Their training had been unhurried, unpressured. In 35 years with Clumbers in the field, I had gained trial awards with seven of these unusual and unlikely-looking working spaniels, more than any owner in the breed’s history. I had also made mistakes, putting the sudden (and hopefully temporary) failure of a previous promising young dog down to an anxiety to expose him to competition too early.
As chance would have it, this early October day was my birthday. It was also the dogs’. Their second. Birthday shoots were a rare treat, and always a bit special. I could recall several. There was one many years before on a Scottish grouse moor, when I had had a right-and-left at driven black game. Another had been the hottest day of the whole year. This day two years ago I had planned to take two adult Clumbers picking-up on a local 400-bird partridge shoot, leaving behind a bitch not due to whelp for some nights yet. On morning exercise, my favourite dog Max, with three field trial wins to his credit and the breed’s most prolific winner ever up to that time, had broken a foreleg in a freak stumble, and by midday had had to be destroyed. By midnight the first few of a fine litter of ten had been born, leaving me and my wife, always the devoted canine midwife, unsure whether to lament or rejoice.

The game bag slung on my shirt-sleeved back was still empty. Both Bella and Boris had already had finds, working individually, the other loose at heel. It was warm and windless, but they had gone with a will, and had been steady to pheasants flushing wild from young hardwood plantations with untended weeds and thistles as ground cover. They had also been steady to a couple of unproductive shots, before hunting on. Boris had found a headless rabbit, brought neatly to hand before it was cast ungratefully into an open pasture for the red kites to spot.

Now, with both dogs a little blown, they were worked as a pair to encourage each other. As Boris slowed, Bella showed continuing drive, indicating the presence of game. I hurried her on, to overcome any inclination to dwell on scent, asking for acceleration instead. A cock was soon flushed and shot, both dogs rock-solidly honouring their training, the bird falling beyond an electric fence in open ground. The dogs were hunted on and a second cock was dropped in the same field. Now the dogs were taken at heel through a gate and, the birds being Bella’s, she was asked to fetch them, Boris to watch and get his chance next time. Their noses having proved sure any number of times on dummies and cold game, Bella found quickly and brought each back by the neck with no more than momentary hesitation at the unfamiliar warmth.

Job done. Heading homeward in the lengthening shadows of a descending sun, and with an equally warm glow within me, I thanked the dogs for a shared happy birthday: one for the memory, as well as the game book. And wished thanks too, to Bob Crow, with contrasting thoughts of trains going to the dogs, and dogs going like trains. =