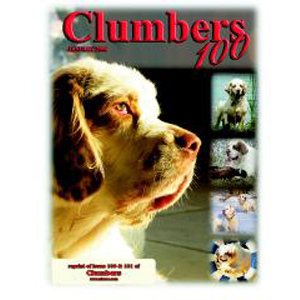 (2006) edited by Jan Irving is available from Amazon and Createspace

This is a massive 100 page celebration of the fabulous Clumber Spaniel , a reprint of the combined issues 100 & 101 of the famous Clumber Spaniel magazine. There are 23 articles and features from around the world covering all aspects of Clumbers and Clumbering, with tons of photos (all in b&w). From collectibles to nurturing the new born, field to show, history to the present day – the lot!

THOUGHTS ON JUDGING CLUMBER SPANIELS by Bill Ironside
Judging is a very serious business and I would advise anyone taking up these appointments to really work at. Learn the standard, study gait and movement, learn what balance means and, as rider, to all this, learn to read when a dog is comfortable and at ease.

JIPPI TO OUR FIELD WINNER! by Eva Masthagen
Judge this year was Maine Sterner and the trial was held at Maines farm on her grounds in Tidaholm, Sweden. Main did judge this competition once before and was looking forward to joining the Clumber people for a day of hunting.

CLUMBERED CLUSTERS by Naiza Woodlief
Most of the figurines/sculptures I picked up on eBay and many were (most of my favourites) sculpted for us by Donna Eddy from photos of our pups. She’s very talented, does all breeds and horse sculptures.

CLUMBER SPANIEL CLUB GALLERY OF BEST IN SHOW WINNERS – OPEN SHOW by Roberts, Anita & UK Club
1973-2005 a magnificent gallery, for the first time, to bring pictures of all the honoured Clumbers who have claimed Best in Show at the UK Club’s Open Show

CLUMBER SPANIEL CLUB GALLERY OF BEST IN SHOW WINNERS – CHAMPIONSHIP SHOW by Roberts, Anita & UK Club
1947 – 2005 a magnificent gallery, for the first time, to bring pictures of all the honoured Clumbers who have claimed Best in Show at the UK Club’s premier event

AUSTRALIAN NATIONAL TELLY by Tracey Garvey
I had worked tirelessly since the initial phone call. I had to write the Clumber info for the internet web site by Wednesday 9am. I did not have time to get his edited by other members but I feel I did justice to the breed.

NORTH AMERICA’S FIRST THREE MALE MASTER HUNTERS ARE CANUCKS by Patrick and Linda Fraser
In Canada having access to upland game birds for training is a rare treat as they are seldom available, and if we are lucky enough to get a few birds finding a place to be able to shoot is difficult as we live in an urban area.

AGILITY WITH CLUMBERS by Judy Hiller
Obstacle performance is really only a small part of the training process. Much more important is the trust and communication established through body cues. It takes the handler a great deal longer than the dog to learn this, but once the handler gets it right, so does the dog!

A FEW MEMORIES FROM THE LATE 60S by Ann Moon
I first became involved with Clumbers in 1967 when I helped out at the Gamewood Kennels of Mrs Reta Goodger near Maidstone, Kent – comprehensive article with loads of photos!

WILLIANA CLUMBER SPANIEL CLUB SPECIALTY WINNERS
Sharon Holland & the club present photos of the winners from America’s second breed club, from 2003 to 2005 featuring some of America’s top and most famous Clumbers.

WHAT IS A WORKING CLUMBER? by Jackie Crawford
One hundred years ago Clumbers were “the gun dog” for working, before Cockers/Springers were bred and took over in the shooting field. Fashion changed – but so did the Clumber mainly in weight. IN 1859 the weight was described as 40lbs.

PUPPY INTENSIVE CARE by Moira Simmonds
A review of the Myra Savant Harris Seminar part 1 of 3 The litter was dropped nine days early on the end of her bed and mom went back to watching Animal Planet. Mom had no overwhelming desire to mother at all. She found the white Poodle on Animal Planet much more interesting than the wet wiggling thing she had deposited on the bed.

TOTALLY CUMBIE by Irene & Ron Packer
The round, soft, squirming, furry sausage of creamy white with lemon drops wriggled its way across Irene and Ron Packer’s carpet and into their hearts.

SWEDISH CLUB SHOW – WINNERS GALLERY
The Swedish Club take us through the history of their show with photos of all their Best in Show winners from Qlummies Quincy Jons in 1981 to Chatarays Sahlene in 2005, with comments and notes and mayny of the Reserve in Show winners featured to.

ENTERING THE KINGDOM OF CLUMBER by John Woodlief
A fabulous account of John and Naiza’s entry to the world of Clumbers and showing … Now, Clumbers make some incredibly unique sounds, no other breed could possibly imitate, as I said, they are not dogs, they are Clumbers. The woo woo, the snorts, and the funky snoring to mention a few, but what Naiza and I heard next coming out of these two as they rumbled was almost indescribable. We had never heard such strange sounds, but close, the best that I could would be a sea lion battling with a grizzly bear, then the Tasmanian devil shows up with a humpback whale thrown in for good measure. This epic battle …

CLUMBERS WITH A VERY SPECIAL JOB by Susan Gariepy
My favourite evenings are when we are able to go to the wards and visit the children who are not able to come to the gym. I always have trouble with Tess because, once she gets on a chair beside a child’s bed, she thinks she should be on the bed curled up with the child. It is so heartwarming to see the smiles, to hear them speak, to hear the care givers day she or he hasn’t smiled for days or spoken a word. These gorgeous big white “teddy bears” bring such joy to these very special children.

AUSSIE CARERS
Karen Johnstone & Lyn Durrington share some of the tales of the puppy Bundy doing his carer training and his uncle Oliver who is a self taught hospital and nursing home visitor between times as a top performing show Clumber.

NOSEWORK FOR YOUR CLUMBER by Ed Presnall
He sees the harness and the line and it starts. Like a white blur he scurries to the door. Impatient he rushes back to you, makes a mad dash through the house and bounces at the door, a plume of white fur slowly settling in the still air. You clip on his lead and open the door. Like an out-of-control freight train he drags you down the steps, doing loops around you, binding your appendages together with his lead. Stumbling and laughing you open the van and he flies into the crate. He knows.

TOP AUSSIE by Jan Irving
A look at Australia’s first ever Clumber shows Best in Show winner and the winners of the “Clumbers” Australian & New Zealand point score winners from 1987 to 2005 with photos of all, plus the announcement of the 2005 award winners. Full photo gallery of Australia and New Zealand’s greatest modern Clumbers.

THE MUNSTER CIRCUIT by Eileen Sutherland
A photo record of the winners on the 2005 southern Ireland four show circuit and a celebration of their wins and wins for the breed at Clonmel in the Brace Stakes and Killarney’s Puppy Stakes.

PDH – YOU DO NEED TO SCREEN ALL YOUR BREEDING CLUMBERS! by Jan Irving
PDH stands for Pyruvate Dehyrogenase Deficiency and relates to the absence of a crucial enzyme in one of the biochemical pathways which occurs in all cells. As an observer you will witness a dog with various expressions, but most often an owner will complain of the pup’s inability to walk comfortably without sitting for more than a hundred paces or so.

HOMES & RE-HOMING by Sue Thomas
As you can see Rescue, Showing and Judging took over my life, and I achieved my ambition in 1981 of owning my first Clumber Spaniel (wh had been rescued). Sadly owing to the trauma of his early life we only had him for a few months but I hope we made the end of his life happy. I then bought my first Clumber puppy in 1982, within a very short time I was invited to become a member of the club committee.

(2006) edited by Jan Irving is available from Amazon and Createspace