Well, I picked up a pile of ‘to file’ and found things I had long forgotten I had lying about, and of course some really well known items too. So, let’s away!

First is one of two great finds I made in Juul van der Linden’s book The Clumber Spaniel in Nederland (2005) – and it was a limited print run of 150 — text is in both English and Dutch. Of course a lot of the well known material is reproduced here as this in an intro to the breed, but, as I said, I did find two items ‘new’ to me. This is one, the cover of 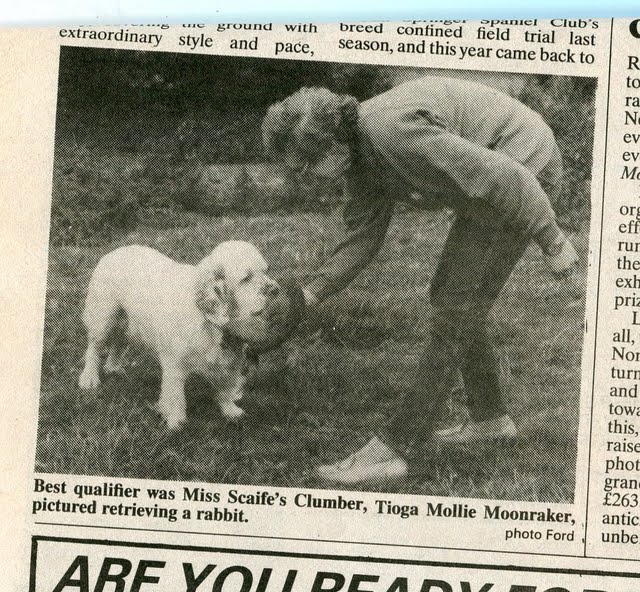 Jumping back a few years again, and across continents, here’s Romp II from a general introductory article to the breed from the American Stock-Keeper (Nov 4 1893) Now there was a huge saga getting my collection of The American StockKeeper, but they eventually arrived! 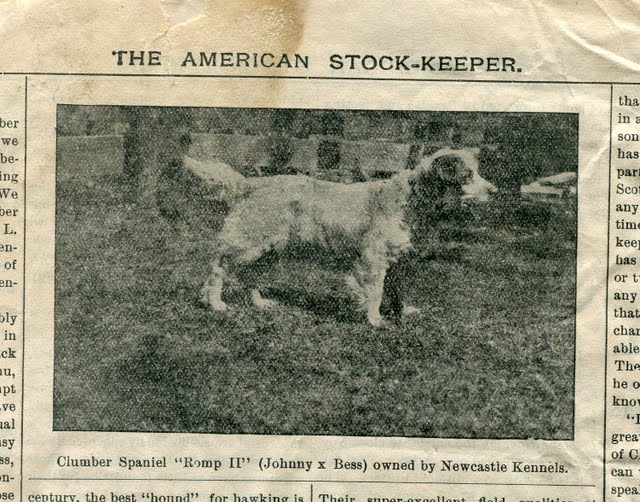 Here is a gem! This is the actual record keeping system then used for purebred dog registrations in Victoria, Australia (having access to this was a ‘perk’ of volunteering for the library which ended up as custodian of all the surviving original paperwork and records.) 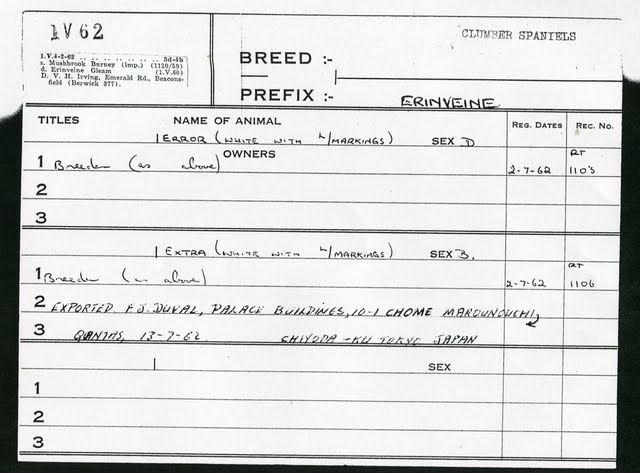 Top left hand corner shows the registration number 1V62 as a rubber stamp (which essentially sates it is the first litter for that breed in Victoria for that year the registration was processed). Under that is the notice as it was printed in the gazette. There were two pups registered in that litter, and the one that was sold (and so officially transferred) has the owner’s details recorded on the litter card.

One of my poor collection of Clumber postal stationery – I am lazy, and file things badly, but obviously kept this envelope because of the the embossing stamp of the Clumber, apart from the rather dapper address label! 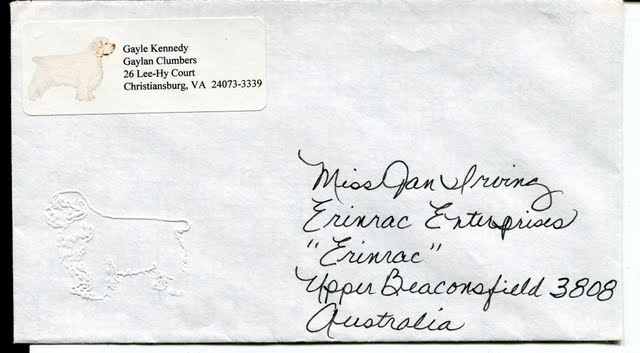 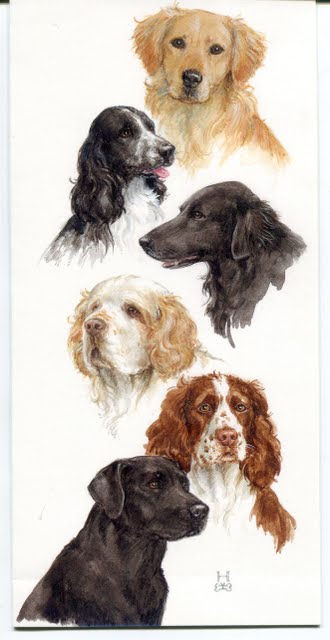 This is a bookmark/giftcard with works by Heather O Catchpole, published by Hockin & Roberts Ltd, sorry no date, but it is obviously post circa 1985, I can tell by who sent it me! The Clumber head study seems to have become a popular machine embroidery motif.

I can’t remember precisely when this arrived, or from who, I am fairly sure it was not too long after the first edition of The White Spaniel was published. This is a photograph of (I think) a postcard, but what is obvious is that the original artwork was done by Alan Wright Vernon Stokes (signed bottom right hand corner) 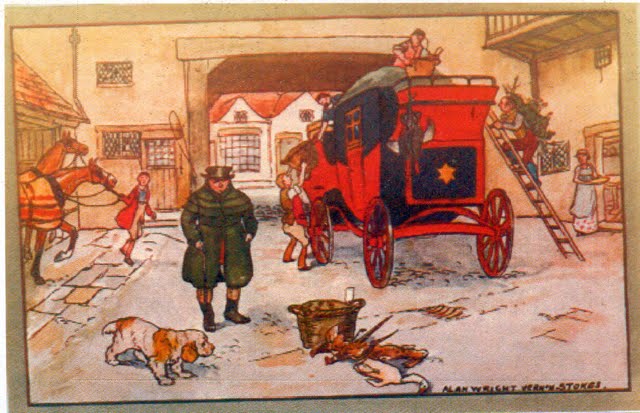 Now this probably no needs introduction, it is the spaniel plate from National Geographic January 1937. It is always appearing on Ebay, and now for just a few dollars. The original is by Edward H Miner, 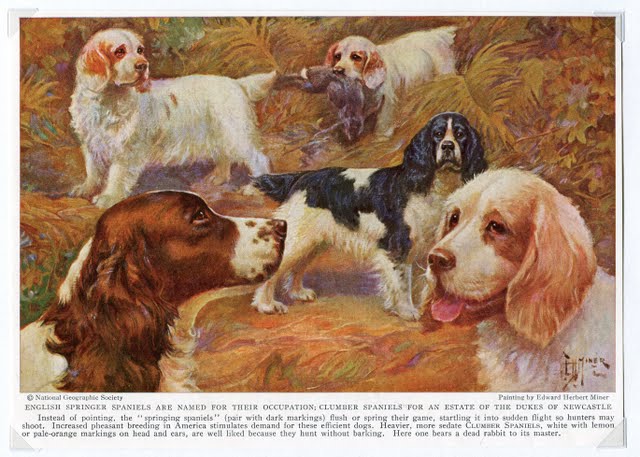 Despite being a prolific book illustrator from that era, and also a successful artist, at this stage, you won’t find much information on this artist online. 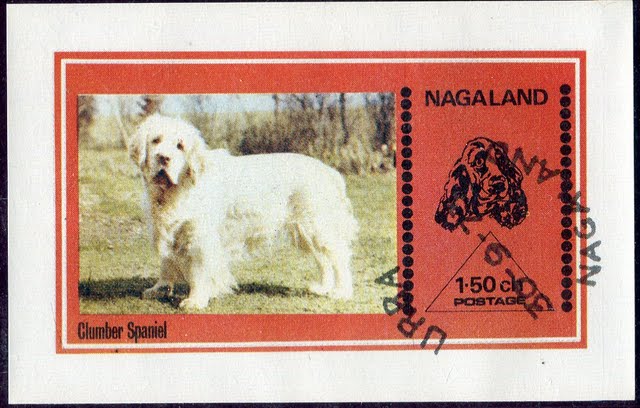 I have in mind this is the earliest stamp to have a Clumber featured, but haven’t checked. Nagaland was a small state within India, and the photo is actually of ShCh Anchorfield Bonus. It is considered a ‘cinderella’ as it was not strictly legal postage outside the state’s boundaries, and sometimes cinderellas are not listed in ordinary stamp catalogues.

Now this is from one of two sources, I have actually scanned a photograph of my original so the makers details aren’t recorded here. I was given two about the same time, one crafted by John Muir in Queensland, and the other by Helen Dupe (Baswei Clumbers) in New Zealand. It is a simple kit, but having done a bit of cross-stitch as a teenager, I really appreciate the needle skills of my two friends – so even! 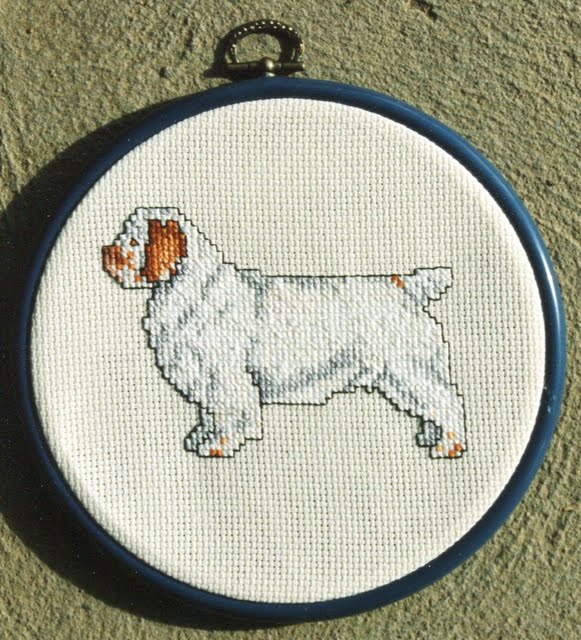