The house sits on the brow of a hill where it has fine views of the Chilterns countryside.

The Victorian Prime Minster, Benjamin Disraeli lived here from 1848 to 1881. He purchased the manor with the help of a loan of £25,000 (equivalent to almost £1,500,000 today) from Lord Henry Bentinck and Lord Titchfield, because as leader of the Conservative Party ‘it was essential to represent a county,’ and county members had to be landowners. 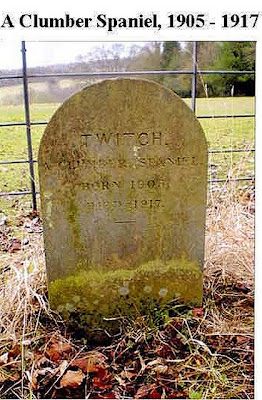 The house, its park and woodlands total almost 1500 acres. In the woodlands, overlooking the parkland, there are five graves for five very special dogs. One of which is for Twitch.

One can only guess as to whom Twitch belonged. Disraeli died in 1881 and was buried with his wife in a vault beneath Hughenden Church. The property passed to his brother Ralph, and in turn to Ralph’s son Coningsby.

Coningsby Disraeli, a Conservative politician was born in Kensington, London in 1867. He was the younger son of the writer Isaac DIsraeli, and inherited the Hughenden Manor estate on his father’s death in 1898. He entered Parliament for Altrincham in the 1892 general election. It was during his ownership of Hughenden that Twitch was roaming the woods and parkland there.

During the Second World War, Hughenden Manor was used as a secret intelligence base, code named ‘Hillside’. The UK Air Ministry staff at the manor analyzed aerial photography of Germany and planned bombing missions, including the famous Dambusters raid.

The Manor House was given to the National Trust in 1949.