Are you only looking for angulation at the hock?

Now this will teach me, my spelling isn’t always crash hot, so I went Google for parts of the dog, no wonder folks are confused about anatomy & conformation – crest has always meant the convex top surface of the neckline, this one site has it for the occiput!

As to forehand angulation, simpler, less joints: well laid shoulder, articulates at the shoulder point with the humerus – in the Clumber I like that nearly as long and laid nearly in the opposite direction, so scapula to humerus (upper arm) is effectively 90 degrees, more angle then lots less ‘lift’ & power, less angle then less lifting power with every degree of slackness, humerus to lower arm (ulna) articulates through the elbow, the leg needs be vertical/perpendicular to the ground when standing – think Corinthian column for roof support compared to columns like the Tower of Pisa . The ulna articulates with the pastern/metacarpus through the wrist joint where with a discrete angle the dog’s fore limbs will get some shock absorbing protection (the fore limbs take the majority of the weight and also need to be nimble enough to change the dog’s direction quickly, etc)

Angulation relates to each and every long bone linked through a joint and also to the relative lay/angles of the major limb positions over the bulk of the skeletal body – eg pelvis to spine lay, shoulder to rib lay – but here ends this lesson 🙂 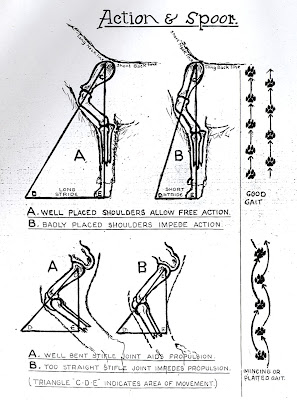 The illustration here is from William Denton’s Canine Culture The Dog Owner’s Manual (illustrations by the author) published circa 1950 and shows so well how the angulation of the fore and hind quarters can be ‘judged’ and in particular the effect of a soft/gentle angulation has on the length of stride compared to a well angulated dog.