Most Clumber list devotees will know of Craig Crouch, Friars Clumbers, I have certainly known him for many years now. Craig is noted for his passion about the history of Clumbers and what some may call a no-nonsense approach on most topics; in fact that is the main reason someone suggested I interviewed him! I knew Craig would appreciate the chance to talk openly and where necessary forthrightly so I put some questions to him that should help breeders, owners, and the Clumber breed.

One of my favourite introductory queries is to ask the interviewee what they think are the persistent and broad spread breed issues, “Structural Balance, Physical Endurance, Vitality and Mental Toughness … a real Sporting dog must have all those, some Clumbers don’t have structural balance; any Clumber lacking physical endurance should not be bred, no matter how good it looks … you can’t fix lazy and stupid if they are combined in the same animal.” These, having talked with many folk across the world over the years are issues that can be overlooked, and the activity on some groups of Facebook only go to prove the point – “my beautiful Clumber”, yet, when I look at the picture I see a dog high on leg, short in neck, and weak behind, but I have a dreadful feeling the owner does not, they are so absorbed by the personality and biddablity of their Clumber they can not see the basics. That is fine for a dog not about to be bred or put into a physical sport, yet I KNOW some of these owners with ‘blinkers’ on think because a judge has generously awarded then something will be seeking to breed from their dogs. It is an awkward situation, I do not want to see the poorer specimens discounted from the ring but I do not want to see false hopes and aspirations given to the owners either. So on top of Craig’s comments on structural balance, physical endurance (which you can’t have with out the first and still have a Clumber), vitality and mental toughness, please also consider the limitations of the show and other competition rings.

Rearing and socialization are rightly hot topics, and techniques have to be adapted according to location, and in Arizona (USA), Craig says, “Due to our brutal heat and dry conditions, worms are not a problem, fleas and ticks are less of a problem too, but we still do worm mom before she is bred, and the puppies before they go to homes.
“ALL Clumbers are supposed to be Gundogs, so we condition them slowly to believe that loud noises are good. We tap a pan when they are first weaned. The tapping gets louder over time, until the “dinner bell” is 2 pans banged together. At 6-8 weeks I fire a blank pistol outside the kennel door, open it , and have all their personal bowls filled with the best stuff, we begin feeding them outside occasionally. Around 10 weeks, I buy six live pullets (young live chickens). We do the blank gun, but they get to chase live flightless birds instead. This exercise tells me which ones are real sporting Clumbers.
“We feed Eukanuba Large Breed puppy + yogurt and rare or blanched meat. I do not like raw diets, due to E. coli being so rampant.”
And on selling pups and adults, “Youngest ever was seven weeks, to a dog behaviorist with a full time caretaker. I prefer 12 weeks or longer, as one of my mentors, Carol Reeves (Woodsman) always recommended. Clumbers ARE a slow maturing dog. It depends upon the individual puppy and new owners lifestyle whether a puppy can go before 12 weeks.
“I have only given old dogs away, to very special people.
“My sale price includes, my Puppy Care kit (bowl, leash, training instructions), vaccinations (DHLPP for Life if the dog is “local”), microchip for show home Clumbers.”

Craig has been interested in Clumbers for many years and breeds under the Friars prefix, in recognition of the famous kennel in the UK from the late 1800s. He has bred a few litters with heavy emphasis on endurance based on structure. What has struck him most about breeding Clumbers is that he was blessed with so much ‘beginners’ luck’, yet now he ‘enjoys’ the luck of everyone else! “I want to prove that true “Dual Purpose” Clumbers, from Master Hunter bloodlines belong in the Sporting Group. Nothing disappoints me more than seeing a Clumber represent us in Group, that is so overdone and so big that it wouldn’t last thirty minutes in the field, let alone all day. I gained that passion from my dear friend Andy Shaw (UK, Greencourts), God rest her wonderful soul. Andy`s name is synonymous with ‘Dual Purpose’.” One can only learn by broadening one’s horizons and bringing that knowledge to bear on decisions a about training and selection of breeding couples, Craig says he learns from history, “and the History of ‘type’…what leads to what ? When you combine Dog X with Bitch Y … what should you expect to get.
“We must keep hunting ability and intelligence within the breed … Clumbers are practically useless otherwise, unless a person is looking for a couch ornament. We have had good successes in conformation, obedience and hunting. I’m actually just as proud of our ‘pet’ Clumbers who went to homes who we knew would never title in any thing … but the dog may have raised children, hunted pheasants or been a ‘last companion’ for an old person. All of our dogs are special to us.”

So, I searched for examples Craig could give us as great Clumbers or Clumbers of great note, “For a ‘Big Dog’ in the USA, which seems to be the trend … I like Roe Froman’s Master Hunter D Too (Ch BlueMoon’s Straight From the Heart JH MH WDX) (ed note: that said, there is no doubt D Too falls within the standard’s height and weight specifications) 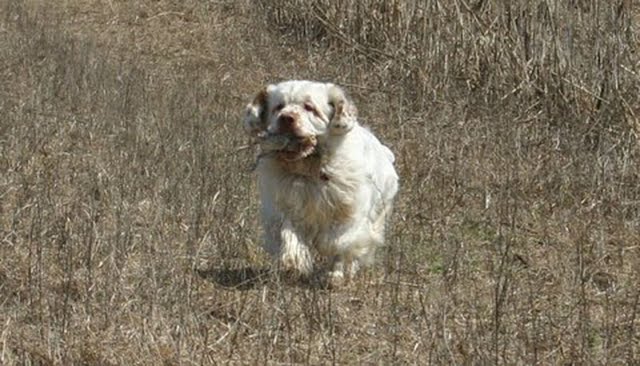 Ch BlueMoon’s Straight From the Heart JH MH WDX
I like him because he actually ROLLS in the field as his natural gait. I could care less what a handler can do in the show ring, let me see how that dog moves naturally in the field! I truly appreciate conformation judges who go to our Hunt Tests and really watch the dogs move in the field. That’s the best “Judges Education” there is.
“I also like Thurber, the Wickwire`s dog in the Northwest USA. (ed note: still waiting for details and pic, I will post when they arrive) 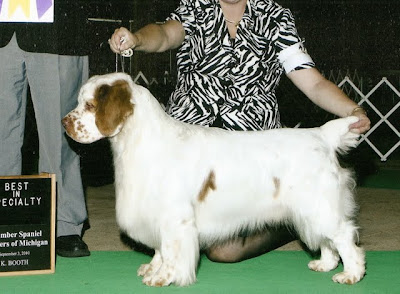 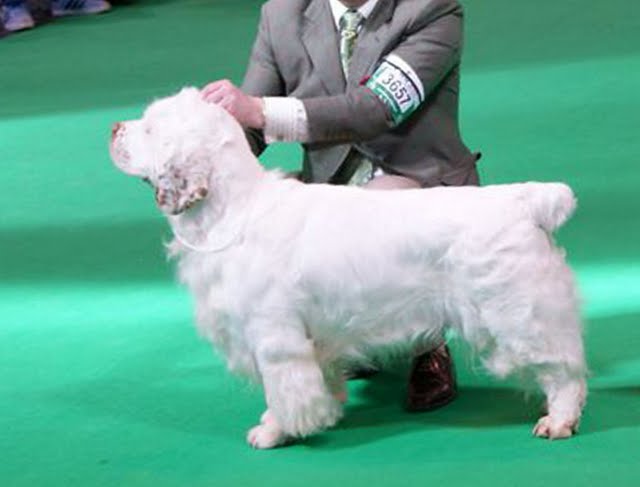 Reverting to interests outside the breed that may influence Craig, I queried him about other breeds he had been involved with, “I started in show Poodles with Mum, whelped my first litter at 10 years old, before mom could get home from work. Gi-Gi was a horrible mom, and I was great kennel help. I have a knack for this.

Since then, Labradors, Golden Retrievers and Brittanys (Brits are no longer called “Spaniels” in the USA (ed or Australia for that matter). It seems we have taken so much spaniel out of the Brittany, that it no longer deserves the name. My greatest fear, is that we will do likewise to the Clumber and it will end up next to the Poodle (another Sporting dog) in the Non-Sporting group.”

I asked Craig how he felt history could help the breed today, “That if you do not learn from history, you are doomed to repeat it. Most of us know the story of the post war ‘saving’ of the UK Sussex by use of the Clumber crosses. We also know by Grayson of the Oakerland Clumber / Sussex crosses which Miss Reed did for field work. This is just one small historical point of many others.
“Why do judges not believe their eyes? Deep browny red and liver markings do not belong on a Clumber Spaniel … they come from the Sussex crosses. They are clearly not lemon, certainly not real orange.
“Real Clumber orange in a pedigree can be played with lemon and does no harm … liver and deep red cannot. This is just one small, but obvious, point about history.
“Another is ‘The Tail’ … that thing which has become a Sacred Cow to multiple nations. The original ‘Friar’, J.T. Hincks (Leichester 1880), was schooled by the kennel masters to look for the setter tail and breed away from it. He used it as a true sign of Clumber lineage. The true Clumber natural tail was shorter and bushy, like a Spaniel’s! The Setter tail was long and like an English Setter’s. The Setter crosses were done to make the ‘pack hunting’ Clumber a quicker, more personal hunting companion which would hunt well as a solitary dog. The Setter crosses were also done by unsavory thieves who sought to hide the Clumber they stole from the estates. During that time, Clumbers were only owned by the Dukes and Royalty, they were the highest level of hunting Spaniel at that time. A mutt that could be claimed as quarter Clumber became more valuable, even if the claim was not true. It only goes to follow, that sometimes the claim was true.”

My sincere thanks to Craig for sharing some of his interest and passion in this breed and demonstrating how history can help us today.