Radclyffe is not the usual spelling of this surname, so it did tinkle a bell or two when I was skimming through Ebay, as an antidote to not being able to find a horse for sale that I wanted to look at! So I placed my bid on the Country Life Illustrated article, actually won the item at a silly low price, and then, it arrived, out of Slovakia in less time than the US Amazon take to ship to Australia!

There are four photos with the Clumbers and a fifth showing the Radclyffe Bere woods, the article is a complete flight of fancy and reminiscence by someone who doesn’t even know Radclyffe. So I popped into my database, built for The White Spaniel

which happens to contain owner and breeder details, and there is CJ Radclyffe, and far from being a new owner at the time of the article (1900), he had owned registered Clumbers from the 1870s! Naturally, I then did some internet research.

Turns out our CJ Radclyffe was a noted sportsman, Master of Foxhounds for the Dorset South Hunt (listed in Bailys Directory in 1876). The woods named in the article are Bere Woods located near Bere Regis in Dorset, and much of the wooded area survives to today. 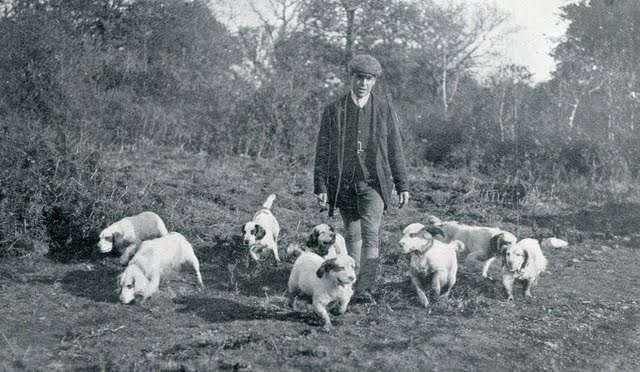 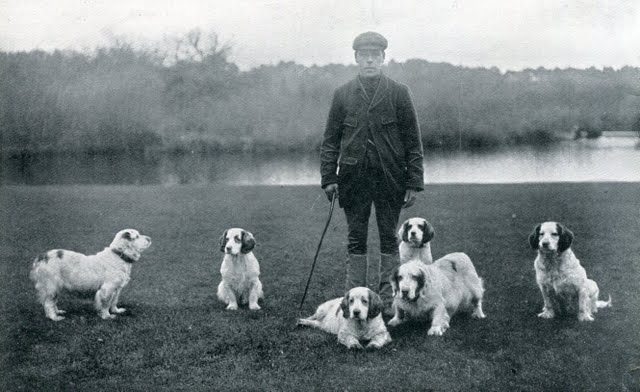 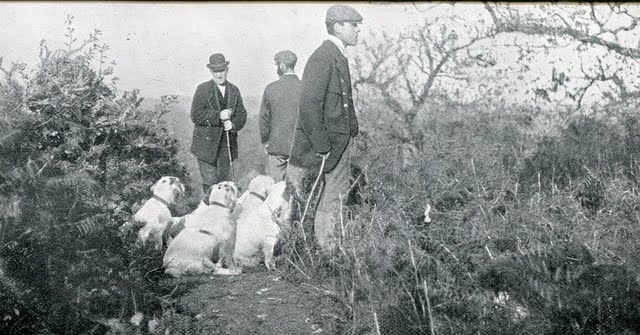 all photos by WA Rouch

Charles James Radclyffe was a JP who lived at Hyde House.
Hyde. The name is probably derived from the word ‘hide’ meaning a farming unit, a term in use at the time of the Domesday survey (1086) and before, as an approximate measure of land area. Hyde has always been a separate manor or estate which in early times belonged to Tarrant Abbey, and in 1293 the annual income in rents from it amounted to �2.75. In 1534, shortly before the dissolution of the abbey the annual income had risen to �4.40:-

After the dissolution of the abbey Hyde manor was granted to Thomas Trenchard, but between 1603 and 1625 it was purchased by John Ryves whose family held it at least until 1725. The estate was valued at �100 per annum in 1641. The Hyde branch of the Ryves family appear to have died out at some time in the 18th century, and the manor was purchased by William Gaisford Peach who in 1837 re-sold it to Charles James Radclyffe whose family retained it until well into this century. from www.bereregis.org

There are at least two Charles James Radclyffe’s of that neighbourhood.

During the 1800s the family acquired new estates in Dorset and for most of the time lived there. The estate itself continued to provide the income for the family.

We see here Charles James Radclyffe who owned Foxdenton from 1854 to 1882 and is seen here in the uniform of the 5th Dragoon Guards with whom he served. It was one of his distant uncles Colonel Charles Radclyffe who maintained the family tradition of fighting the French when he took part in the Charge of the Union Brigade at the Battle of Waterloo.

CJ Radclyffe was High Sheriff of Dorset in 1856, no doubt it was his son who held the office in 1885.

There is an entry for Hyde in �Hutchins�s History of Dorset�, originally printed 1861-74. as follows :- ����.. �in 1837, resold the manor to Charles James Radclyffe esq., the present owner. Mr. Radclyffe has erected a commodious mansion here and otherwise considerably improved the estate. The river Piddle flows through the property, and near the mansion has been bayed up into a fine broad sheet of water, which adds much life and beauty to the place.
Mr. Radclyffe’s kennel for the South Dorset Hunt is at Hyde’ from www.richardbrewster.org

The dogs that are listed in the Kennel Club Studbook entries (so most often are ancestors rather than Studbook dogs themselves) include:
-Crusoe bred by Lord Hopetown, by Foljambe’s Brush from Hopetown’s Fan wh 31 July 1876
-his own Duke III by Radclyffe’s Tramp ex Lotus 17192 bred by Mr Allen
-CJ Radclyffe Jnr’s Trudge IV bred by Foljambe

It seems Labrador historians will be more familiar with CJ Radclyffe then Clumber folk. The St Johns Water Dog first arrived in the UK in the early 1800s, and was known as the Labrador Retriever by 1870. Major CJ Radclyffe was the owner of the first recorded yellow in the UK. Born in 1899 he was called Ben of Hyde, he was actually bred by Radclyffe. The breed was first accepted by the Kennel Club in 1903, and the American Kennel Club in 1917. Radclyffe had bred Labs as early as 1873.

FROM A GENEALOGICAL AND HERALDIC DICTIONARY OF THE LANDED GENTRY, B. BURKE LONDON 1858

Lineage.-The family of Radcliffe took its name from the village of Radcliffe, near Bury, in Lancashire, one of decidedly Saxon origin.

RICHARD De RADCLYFFE, of Radclyffe Tower, co, Lancaster, Seneschal and Minister of the forests of Blackburnshire, accompanied King EDWARD I. in his wars in Scotland, and received from that Prince, in the 32nd year of his reign, a grant of a charter of free warren and free chase, in all his demesne lands of Radclyffe,. He m. a dau, of Boteler, of Bewsey, Baron of Warrington, and had issue : I, ROBERT, of Radclyffe Tower, ancestor of the Radclyffes of Smithills; II. WILLIAM, of Culcheth and Edgworth, and afterwards of Radclyffe Tower, usually styled the “Great William,” ancestor of the RADCLYFFES OF RADCLYFFE TOWER, and of’ the Radclyffes, Barons Fitzwalter and Earls of Sussex ;III JOHN (Sir), of whom immediately, The third son,

Sir JOHN RADCLYFFE, Knt,. of Ordshall, Lancashire, represented that co. in Parliament, 14 Edward III,, and served under the same monarch in his French war participating in the sieges of Caen, Cressie, and Calais, His great-great-great-grandson,

WILLIAM RADCLYFFE, Esq. of Ordshall. (son of Alexander Radclyffe, of Ordshell, by Agnes, his wife, dau, of Sir Williaim Harington of Hornby Castle, and great-grandson of Sir John Radclyffe, Knt, of’ Ordshall, whose wife was Margaret, dau, of Sir Henry Trafford, of Trafford) m. Jane, dau. of Sir Edmund Trafford, Knt, of Trafford, and by her (who m 2ndly, James Byron, of Clayton, and 3rdly, Talbot, of Salesbury), had issue, William Radclyffe d. 15 May, 13 Henry VII,, and was s. by (the elder son of his son John, by Elizabeth, his wife, dau. of Sir William Brereton, of Brereton) his grandson,

Sir, ALEXANDER RADCLYFFE, of Ordshall, Knt, High Sherriff of Lancashire, 1347, m. Alice, dau of Sir John Booth, Knt, of Barton, in Lancacashire, and had four sons and three daus,, I, Anne, m. to Sir Edmund Trafford, Knt, of Trafford; II. Elizabeth m. to John Atherton, Esq, of Atherton, in Lancashire; and III. Eleanor, m. to Sir Richard Molineux, Knt, of Sefton, Sir Alexander d. in 1548, aged 78, and ;was s. by his son,

Sir WLLIAM RADCLYFFE, Knt. of Ordshall, on whom and the heirs male of his body, were settled the FitzWalter estates, on failure of divers remainders mentioned in the Will of Henry Radclyffe, 2nd Earl of Sussex, He left issue by his 1st wife, Margaret, dau, of Sir Edmund Trafford, three sons: I, ALEXANDER (Sir), Knt, of Ordshall, d, s. p. 26 Sept. 1568 ; II, John (Sir), successor to his father; III, Richard, of Newcroft in Lancashire : I, Alice, m, to Frances Tunstal, Esq. of Thurgoland Castle; and II, Ellen, m. to Edward Standish, Esq. of Standish Sir William d. 12 Oct, 1568, and was s. by his son,

Sir JOHN RADCLYFFE, Knt, of Ordshall. He m., Anne, only dau, and heir of Thomas Ashawe, Esq, of the Hall-on-the-Hill, in High Charnock, Lancashire, and had issue five sons, ALEXANDER, his heir; William, slain in the irish Wars; John, successor to his oldest brother; Edmund, slain in battle, in Flanders; and Thomas, who was killed at the same time ; and four daus,; Margaret, favourite Maid of Honour to Queen ELIZABETH, d. of grief for the loss of her brothers; Jane, wife of Sir Ralph Constable, Knt, ; Anna, d. unm, ; and Alice, who d. unm, Sir John d. 1559. His eldest son,

ALEXANDER RADCLYFFE, Esq. of Foxdenton, bapt. 17 Jan. 1677, became seized of the Foxdonton estates by virtue of the Wills of his cousins, Mrs. Mary Byron and Mrs. Susan Potter, the daus, of William Radclyffe, Esq. of Foxdenton, the son of Richard of Nowcroft. He m. Elizabeth, dau. of John Bagshawe, Esq. of Litton and Hicklow, in Derbyshire, and by her, who d. in 1735, left a dau., Mary, m. to the Rev. Samuel Sidebottom, M.A, Rector of Middleton, in Lancashire, and an oldest son,