Editor: Part of the long ladder to field trialing, in the United Kingdom, is the participation in Working Tests, which are a valuable assessment of how training is progressing and the dog’s aptitude. Our special thanks to Graham Constable for bringing these reports in eloquent prose to the fore!

The Working Clumber Spaniel Society held its first working test of the year on what can only be described as the foulest Sunday of the year so far. The 14 Clumbers and 1 Welsh Springer Spaniel and their handlers were all in suitable attire for the day. 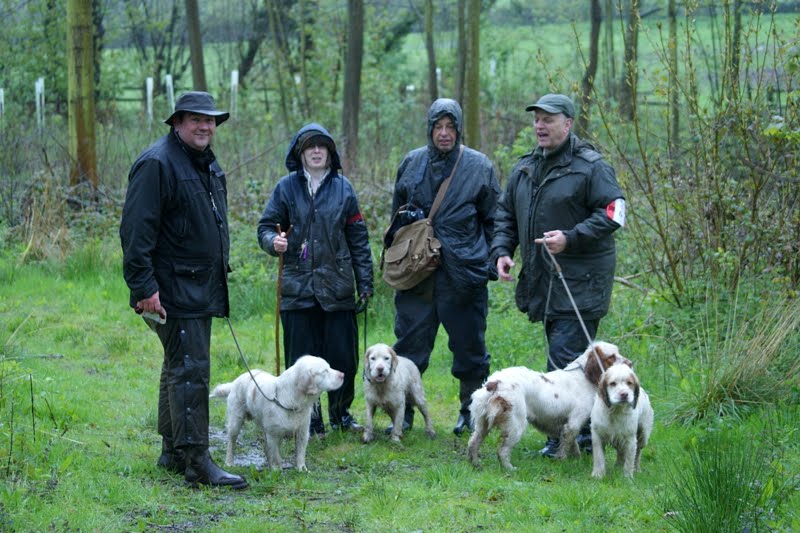 After being introduced to the judges Mr Steve Russell and Mr Niel Satchwell it was decided that as the weather was so bad we would run the Novice Test and move straight into the Open Test without stopping for lunch.
The ground that had been selected to run the Novice Test over was a wooded area with quite low cover and well-spaced out trees.

The first to go was myself with Sedghurst Alma (Brie) and Mark Gray with Tinglestone Sparkler (Frank). The dogs and their handlers were finding the conditions challenging and it was not long before people were coming back to the gallery with an unhappy look on their faces having not had a good run. My first run was slow as Brie was finding the very wet cover hard to move in and I am sure that the constant downpour of rain was not helping.

By mid-day all the handlers had done their two runs and as we came to the end of the last run there was a break in the weather so it was decided that it would be good to give the dogs a rest back in the vehicles and for ourselves to grab a bit of lunch. 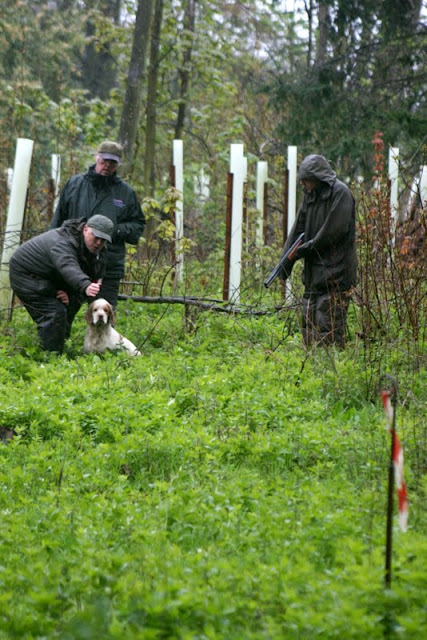 After lunch we moved off to another wood once again in the pouring rain. This wood was the same as what we had used in the morning but this time there was a release pen in the middle of it. There were only 7 dogs taking part in the Open, 6 Clumbers and 1 Welsh Springer Spaniel. The handlers found this test very challenging as it was quite a distance back to the blind dummy and everyone had to handle their dog a lot more than they would have liked to get to this dummy.

By 3 o�clock I think everyone had had enough of the weather and were glad when the final run had been completed.

The awards for the day were as follows.

After the prize giving we all thanked Andy Hales for running the event and all look forward to meeting at the next event.

The judges for the day were Mr Ron Andrews and Mr Martin Kilminster.

The ground that had been selected to run the four tests (Beginners, Puppy, and Novice & Intermediate) over was a wooded area with quite low cover and well-spaced out trees with a small brook running through it. Due to the amount of rain that had fallen in the area the ground was very wet under foot.

The first to go in the puppy test was Mark Gray with Abbyford Snow Queen. The dogs were finding the conditions very sticky under foot due to the wet and this was making them move not as well as they would normally. However Mark had two good runs and came back to the gallery pleased with how she had performed. 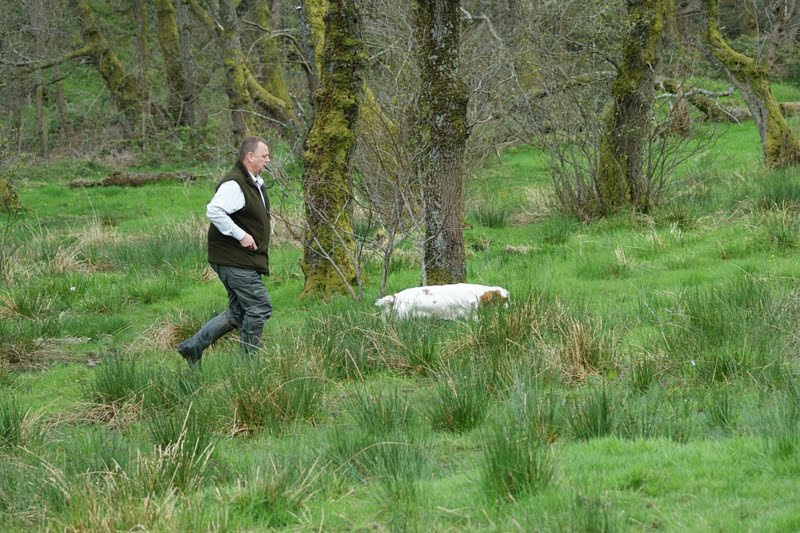 The next test to be run was the Novice in which I was running with Sedgehurst Alma and Mark was running with Abbyford Snow Queen. We both had two very good runs and we could see that the Clumbers were moving far better on the day than any of the Welsh Springers.

By mid-day all the handlers in the puppy and novice had done their two runs and as we decided all shuold take a break. As we were having our lunch the judges called for a run off for the Novice Test and to my surprise I found myself being called forward to do the run off against one of the Welsh Springers.

After lunch we moved off to another piece of ground to run the open on. This area was running alongside a river and was once again very wet under foot. There was a small wooded area which opened up to long brown grass. Both Mark and I were running in the open but this time Mark was running Tinglestone Sparkler.
By 4 o�clock everyone had had completed their two runs and we returned to the cars for the awards.

The awards for the day were as follows. 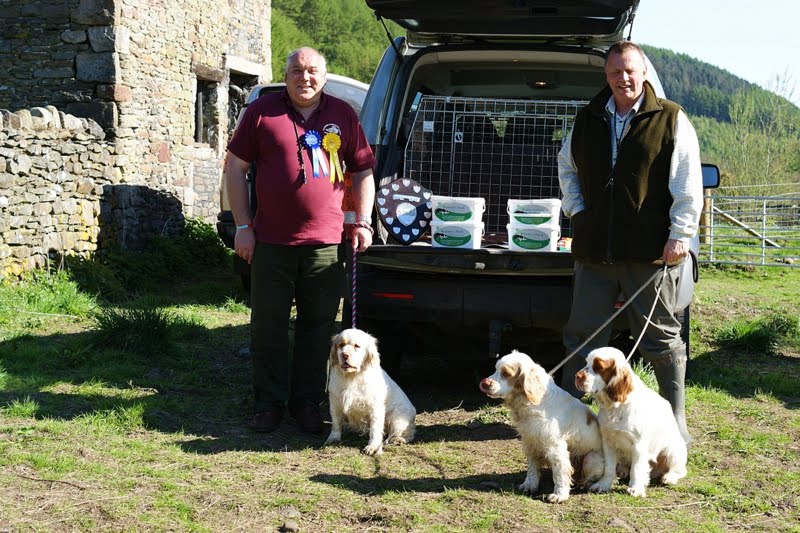 After the prize giving the judges commented on how slow some of the dogs had moved in the sticky conditions but they were very impressed with the turn of speed that had been produced by the Clumbers.

Graham has also contributed for this issue a report on the working Clumbers at Crufts and a super story on a special training class weekend he won. His reports on the 2011 field trials will appear in an upcoming issue.